In the case of Linear LED tubes, the cross over from Fluorescent tubes has only happened in the last 1-2 years. The key factor of energy usage means even a good quality fluorescent needs 42-46W to deliver a similar light onto a bench or a floor as an 18W LED tube. LED tubes are now delivering over 120 Lumens per Watt verses fluroescents which, after almost 100 years of refinement, cannot get past 70-80 Lumens per Watt – that’s the measure of light out for a given amount of electrical energy in.

A fluorescent tube will last 10-15,000 hours and an LED tube will easily make it to 50,000 hours, allowing for the gradual fall in light output which all lighting technologies suffer. When you add the fact that LED tubes can be dimmed and fluorescents cannot be, the energy dividend to using LED in some applications leaps ahead again. The payback for an LED tube swap out from fluorescent light is around 12 months when paying 20 cents per Kilowatt hour or more for power.

In the high  output light range, LED High Bay lights are now a far superior proposition to Metal Hailde lights, which have been the default solution for lighting large spaces since they were invented in the 1960’s. Now that LED High Bay lights can deliver 100 Lumens per Watt and last reliably for 50,000 hours or more, the economics for anyone paying 15 cents per Kilowatt hour or more for their power, make LED a smart use of capital to reduce costs. The ROI on swapping out Metal Halide for LED High Bays is typically around 50-65%.

And then there’s the MERCURY…..

ALL fluorescent tubes, CFL. “eco-globes” and Metal Halide lights contain the heavy metal, mercury. If the tube or globe cracks you MUST evacuate the space and follow careful clean up instructions – if you want to avoid ingesting and accumulating mercury. This is especially serious for gestating or feeding mothers, as methymercury crosses the digestive and blood barriers to inflict damage on any nerve tissue. GO HERE for more information. 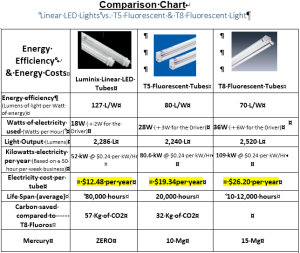